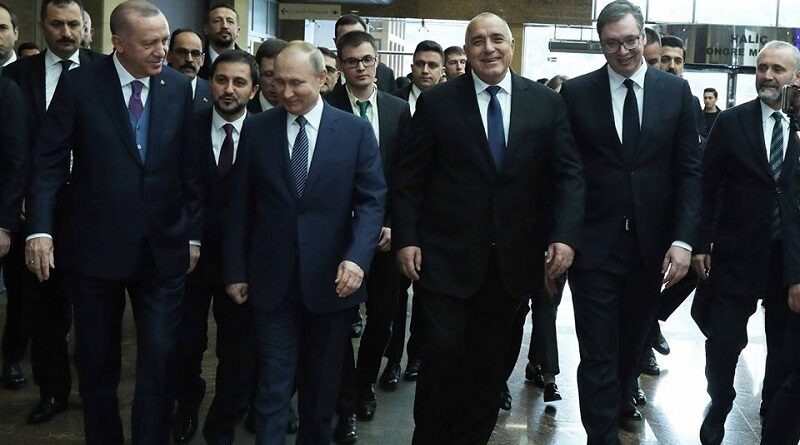 At the end of this year, the first Azeri gas will reach Italy via the Southern Gas Corridor – its final destination. The EU has successfully implemented its plan to boost competition to Gazprom as a gas source base and delivery routes. The success, measured in reduced market shares of the Russian gas monopoly in the East European and SouthEast European gas market, is somewhat subdued and prone to different interpretations.

President Vucic of Serbia broke the conspicuous silence of his Bulgarian counterparts and announced the launch of the Bulgarian segment of TurkStream. According to Serbian media outlet Blic, quoting the Serbian head of state, gas will start flowing into Serbia on January 30th, but both he and PM Borissov will avoid ‘making a big deal’ out of it. The Bulgarian PM does not usually miss any groundbreaking and ribbon-cutting ceremony. Still, this time, he prefers to keep a low profile and avoid being in the news spotlight as U.S. sanctions are pending. Despite the veto imposed by President Trump on the NDDA for 2021, which includes stricter sanctions on both Nord Stream – 2 and TurkStream-2, it won’t buy much time for Gazprom’s partners in TurkStream. The U.S. Congress is expected to override the presidential veto next week. Both Putin, Vucic and Borissov are in a great hurry to formally declare the pipeline a fait accompli before the sanctions come into force. Even though no compressor stations and coming online have been authorized at EU or national level, gas is due to start flowing in the usual manner as the whole project has been executed – without abiding by the rules.

As Azeri gas will reach Italy, first Russian gas will enter Serbia through Balkan Stream – highlighting the all-out race between the EU and the Russian version of the Southern Gas Corridor. Without compressor stations, providing adequate working pressure, the gas volumes entering Serbia will be very modest – less than 15 mcm/day, yet enough to guarantee Gazprom’s monopoly over the Serbian market.

However, the stakes are much higher than the control of Bulgarian or Serbian national gas markets -where big geopolitics comes into play. It is all about control over the West Balkans and East European gas market. Unfortunately, Bulgaria has chosen to play for the losing team.

The European Commissioner for Neighborhood and Enlargement, Oliver Varhelyi, stated these days – “Building on the important progress made this year in finalizing the Southern Gas Corridor; we are keen on exploring its possible extension to the Western Balkans”. He is not talking only about the Ionian-Adriatic pipeline, but the TAP extension into Northern Macedonia and beyond.

Russia’s geostrategic play is nothing new – it seeks to convert control over the Balkan stream’s transmission capacities into dominance over markets in Serbia, Bosna and Herzegovina, Montenegro, Kosovo (via the Skopie-Pristina gas pipeline or a new duct to Kosovska Mitrovica).

As in a consistent master plan, at the heart of Kremlin’s plans lies an expansion of the Banatski Dvor UGS from the current 350 to 1 bcm of capacity, codified in a joint MoU signed by Gazprom’s CEO Alexei Miller and Serbiagas CEO Dusan Baiatovic in 2019.  The almost full storage capacity is booked for Russian gas and the planned peak withdrawal levels of 10 mcm per day underline Russia’s resolve to turn Serbia into its main trading base in SouthEast Europe.

Such plans could be seen as the energy upgrade to the existing Russian military hardware sales and the quasi-military base, disguised as a humanitarian centre in Nis, complementing each other to turn Serbia into a geopolitical outpost of Russian influence and a credible anti-thesis for Atlantic accession for the Western Balkans.

The Bulgarian government seems ready to comply with Kremlin’s game plan both by allowing overflights for Russian military cargo planes, carrying strategic weapons to Serbia, such as the S-400; a decision to invest $ 2 billion in TurkStream infrastructure, securing the gas bridge equivalent to the Russia-Bulgaria-Serbia military bridge referred to above. The refusal to green-light North Macedonia’s EU accession talks start could also fit into the joint Serbian and Russian strategy.

The Bulgarian NGO Boetz has recently received a response from the EC DG ENER to a letter it sent earlier, alerting the Commission on substantial procedural flops and misappropriation of EU funds in the course of TurkStream’s construction in Bulgaria. The Commission makes an explicit commitment to impose sanctions, following the infringements found to the EU law.

The DG ENER’s letter ends with a clear-cut reference to the scheme pursued by BTG and the GoB to support Gazprom’s monopoly in the procedure to allocate capacities: “The capacity (in TurkStream) was offered at the end of 2018 and the beginning of 2019 to the market following the approval of the procedure by the Bulgarian regulatory authority”.

In previous analyses, we have referred to the reason behind BTG’s labelling Turk Stream’s with different names – “extensions of the gas transmission system”, “Balkan Stream”, and so forth. Except for the part in Bulgaria, the pipework has been consistently referred to as the TurkStream – in Russia, the U.S. and the EU. The name changing game was suggested at the end of South Stream in 2014 by Gazprom’s legal team to avoid the EC’s intervention. “National network expansions” are regulated by the Bulgarian national authority, whose independence is just a Prime Minister’s phone call away.

Given the conditionality around the project’s completion status, the legal battles will only intensify. TurkStream traverses the territory of more than one EU member state, which implies an EU level, not a national regulation. Although Bulgaria and Hungary are not neighbours, recent changes to the EU Gas Directive, call for mandatory EU regulatory oversight and approval of cross-border infrastructure, exiting or entering the EU.

U.S. sanctions also seem irrevocable, and the change of nameplates does not seem to impress Washington. However, the U.S. position seems ambiguous – “condescending” signals are coming from the White House and some diplomatic representatives regarding TurkStream, embodying Trump’s transactional diplomacy. A tougher line is likely to gain the upper hand with the change of guard at the White House and Congress. Questions arise over the lack of evenhandedness in the new U.S. sanctions as American companies supplying critical equipment for Turk Stream’s compressor stations are exempt.

The dilemma – “EU versus national regulation’ with transit infrastructure, depends mostly on the impact of the allocated capacity on the national vs regional market. The case for national impact-national regulation is weak as none of the gas that the Balkan Stream will carry, will end up with Bulgarian consumers or the Balkan gas hub. Meanwhile, the case for EU regulation is strong as almost 13 bcm of the gas will be used in EU member countries – Bulgaria and Hungary. Equally, the 100 per cent control on Serbia’s entry capacity wipes out even the slimmest chance to present Balkan/TurkSteam as anything but a project preempting competition to Gazprom in the SEE market.

Bulgartransgaz is trying to evade responsibility by alluding to the distant possibility of an interconnector to Serbia that will, at least in theory, allow Gazexprot’s competitors access to Serbian and neighbouring markets.

TurkSteam only adds insult to injury.

Azeri gas delivered via the Southern Gas Corridor is likely to crowd out LNG deliveries entering the region via the Revithoussa terminal as both use the chokepoint – the Siderokastron-Kulata interconnector. While Gazprom controls most of the interconnector’s fixed direct capacity, its competitors – Azeri and LNG – would have to cope with the remaining interruptible capacity. There is hardly a room for more non-Russian natural gas to enter or exit Bulgaria, as 80 per cent of the domestic market is controlled by ‘take or pay’ mandatory purchase from Gazprom. Gazexport’s control of exit routes makes gas sales beyond Bulgaria, including the reverse flow of the Trans-Balkan pipeline, a fiction. Thus Bulgaria instead of a conduit becomes a barrier to gas diversification from the Southern Gas Corridor to Eastern and Southeast Europe.

Even the state trader Bulgargaz will be unable to sell its surplus gas beyond Bulgaria’s borders, which leaves it with no option but to dispose of its contract for Azeri gas, without it entering Bulgaria.

The above facts are hard to dispute and are at odds with the Bulgarian PM’s, and BTG CEO’s statements that the country’s transit system and TurkStream will facilitate regional gas diversification, allowing free and uninterrupted transit of non-Russian gas in all directions. This privilege, reserved for Gazprom only, is presented to the Bulgarian and international audience as a significant coup – retaining the country’s place on the geopolitical map, more precisely on Kremlin’s geopolitical map.

At the same time the EU and the U.S. are trying to free the regional gas market, including the Western Balkans, from energy dependencies on Russian gas, investing billions and betting on the Southern Gas Corridor and LNG, Sofia is betting on Turk Stream, conditioning its future revenues to larger transits of Russian gas.

The explanation is simple though not gratifying – Bulgaria is under the rule of long-standing corruption addicts – politicians and oligarchs, born and bred to serve and profit from Russian energy flows.

Prime Minister Borissov is reported to have confessed in a close circle of friends and associates at the start of the Turk Stream, faced with inquiries for Azeri gas transit using reverse flow via the Trans-Balkan Pipeline – “it is too late, I have already got married”.

So much for geopolitical maps and interplay. Some people are in the business of getting personally wealthy, using geopolitics Putin’s way. 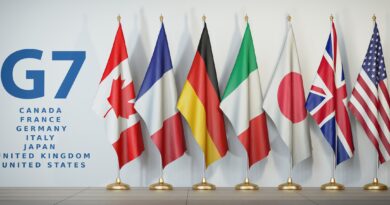 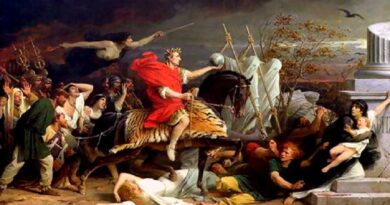 The shape of things to come – contain or appease ? 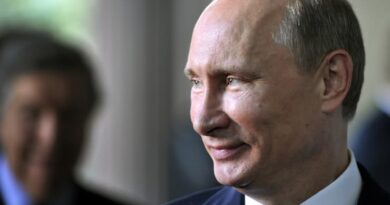 Will Putin attack Ukraine – or is that the wrong question?

2 thoughts on “Alternatives & Analyses: The Southern Gas Corridor – the collision of the Russian and European options”